ghc-events-analyze is a new simple Haskell profiling tool that uses GHC's eventlog system. It helps with some profiling use cases that are not covered by the existing GHC profiling modes or tools. It has two major features:

It is very useful for profiling code when ghc's normal profiling mode is not available, or when using profiling mode would perturb the code too much. It is also useful when you want time-profiling information with a breakdown over time rather than totals for the whole run.

We developed the tool at Well-Typed while working on client projects where we had profiling needs that were not covered by the existing tools. We are releasing the tool in the hope that it will be useful to others.

Suppose we want to understand the runtime performance of the following simple multi-threaded application:

We can compile this application and ask it to produce an eventlog:

But when we open this eventlog in ThreadScope the result is not particularly enlightening:

The program was compiled without the -threaded flag, forcing all work to run on a single HEC (Haskell Execution Context — roughly, a CPU core). This makes it impossible to see the distribution of workload across the various application threads. This will be true whenever multiple threads are executed by a single HEC (i.e., almost always). Of course ThreadScope is really designed for looking at parallel programs, and that's not what we've got here. Here we're trying to understand the behaviour of a simple concurrent program.

Some points to note:

If we instrument our code, we can improve this diagram in a number of ways. We can use labelThread from GHC.Conc to give our threads names, so that it becomes easier to see what's what.

Moreover, ghc-events-analyze lets us give labels to periods of time during execution which we can then visualise or get statistics on. To label a period of time we use the event tracing functions from Debug.Trace. We mark the start of a period with

and the end with

Use traceEventIO if you are in an IO context, while in a pure context you can use traceEvent.

Note that these labelled time periods are completely independent of threads; they can overlap each other, span multiple threads, etc. Here's our example application again, but with some instrumentation added:

If we run the same code using the threaded runtime (but still on a single core), we get

and if we run it on two cores

Bear in mind, however, that ghc-events-analyze divides the total time up into n buckets, so what you can not see from these last two diagrams is that the total time taken is less when running on two cores.

ghc-events-analyze also outputs some totals. For the single core case it tells us

and for the two cores case

For the user-labelled time periods the tool is giving us the wall-clock time between the "START" and "STOP" events, excluding time spent doing GC. If there are multiple start/stop periods for the same label then it gives us the total time. We exclude GC time because GC happens at essentially arbitrary points and it would not be helpful to account the full cost of a GC to one user-labelled time period (which might otherwise be very short indeed).

Some notes for this example:

Well-Typed have been developing a server application for a client. The client reported that after certain kinds of requests the server had unexpected spikes in CPU usage. For technical reasons we could not compile the server application in profiling mode, and hence profiling information was not available. Moreover, GHC's normal time profiling would have given us totals across the whole program run (broken down by cost centre), but we needed a breakdown of CPU usage over time. We could however generate an eventlog. Visualizing the eventlog with threadscope yielded

We can make certain educated guesses from this picture: the spikes in activity are probably different requests coming in to the server, and the reported unexpected CPU usage reported by the client might be related to garbage collection (the orange blobs that threadscope shows). However, instrumenting the code (by labelling some threads and labelling time periods that correspond to the server handling different kinds of requests) and then running it through ghc-events-analyze yielded a more informative picture:

(ghc-events-analyze's reports are fully customizable through a simple scripting language; many of the diagrams in this blogpost are generated using custom scripts in order to improve readability.) The labelled time periods now clearly show when the server is handing requests of type A and B, and we see corresponding spikes in CPU activity in the server's main thread (with ID 6). Threads 4 and 5 handle communication between the client and server, and we see "blips" at the start and end of each request, as expected.

This lead us to suspect "idle GC". The GHC garbage collector will run in two cases: (1) when required when we're out of memory, and (2) after the whole program has been idle for a bit. The latter is known as idle GC. The point of idle GC is the hope that we might be able to return some memory to the OS. The default is to do a GC 0.3 seconds after the program becomes idle. This means if your program does a tiny bit of work every 0.4 seconds but is otherwise idle then you're going to be paying for a major GC every 0.4 seconds. We can adjust the timeout for when idle GC happens, or even disable it entirely using the +RTS -Ix flag. In our case, running the server with a much longer timeout for idle GC cycles yielded this picture:

Note how we no longer see much garbage collection during B requests; we still get garbage collection during A requests, but that is expected. Moreover, we don't see any garbage collection after the second B request either. We found that this had been due to a new thread (199) that was spawned by the second B request. This thread was running occasionally but because it was the only active thread it determined whether the whole system was idle. It was letting the system go idle just long enough to trigger idle GC, then doing a tiny bit of work, more idle GC etc. These collections are not cheap because they are major collections that scan the whole heap.

The simple thing to do in this situation is to just disable idle GC entirely with +RTS -I0. We decided to keep it because it is still useful to return memory to the system in this case, we just use a much longer timeout.

Well-Typed was asked by a client to help improve the performance of an application. At one point during this work we needed to determine what proportion of overall execution time a certain family of functions were taking, and a breakdown between these functions. GHC's normal time profiling was not appropriate for a few reasons:

The overhead added by enabling the eventlog is negligible however. Moreover, we can easily use traceEvent to label the execution of our class-overloaded function for each of its various instances (like we did in the fib example, above). The totals reported by ghc-events-analyze enabled us to easily get the total time taken by this family of functions and the breakdown by instance, and to guide our subsequent improvements (like normal profiling would).

We have replaced the real names from this program with labels A–X. By comparing the overall execution time excluding GC (which we get from +RTS -s) we can see that the total of all these calls made up the vast majority of the program execution time. So this tells us that we don't need to worry about optimising the rest of the program and can concentrate on this family of functions. We can also see that the top few most expensive variants of the function account for the majority of that time. Thus we were able to focus our attention on the parts of the code where there was greatest opportunity to make improvements.

In this case the visualization of CPU usage over time does not tell us much extra: 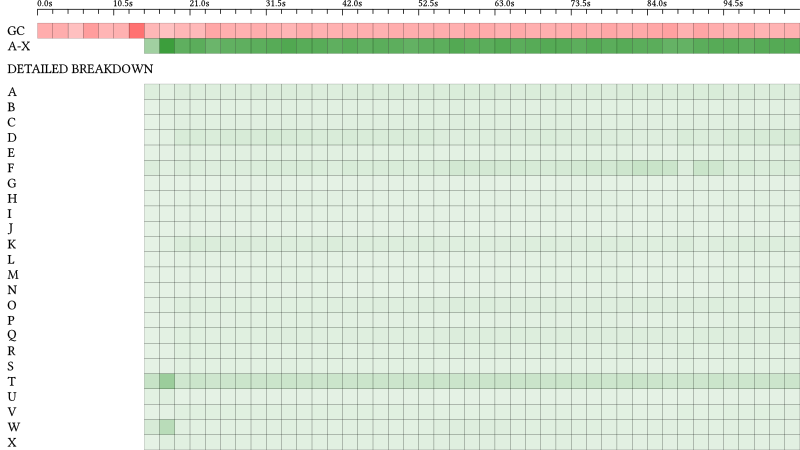 except that our family of functions are indeed busy very consistently after an initial setup (at about 60% of CPU, with the garbage collector running at about 25% CPU).

It is worth noting that when we generated the eventlog for this application we selected only user events and GC events (+RTS -l-agu -RTS). Excluding the thread scheduler events dramatically reduces the size of the eventlog, which in this case would have been too big otherwise. ghc-events-analyze does still work without the thread scheduler events being available, but you do then miss out on the per-thread breakdown of CPU activity. Moreover, since the creation of this diagram is relatively time consuming for large eventlogs, you can ask ghc-events-analyze to omit it if you are interested only the totals and the breakdown.

Patches for bug fixes or feature enhancements are welcome! The code is written to be easily extensible with additional reports or analyses.